The telecom regulator’s crackdown on call drops should have led to better quality all round but the price wars that have resulted in cheaper rates appear to have led to a worsening in the situation of late, especially in urban areas. ?Executives and experts say it may take a few years for things to improve.

Amid the surge in demand for higher revenue-generating data services, financially stressed telcos are dedicating more resources, including voice bandwidth, toward mobile internet or combining that with voice, they said. Moreover, ongoing consolidation means overlapping sites are being shut down, leading to existing cell sites getting overloaded. Tower companies such as GTL Infrastructure alleged that carriers aren’t paying enough for maintenance of towers amid a cash crunch, exacerbating the situation.

But RS Sharma, chairman of the Telecom Regulatory Authority of India (Trai), said this can’t be a justification.

“There can be no excuse for call drops,” Sharma told ET. “There’s no doubt that the responsibility to improve levels of call drops lies with the operators.”

With pricing stability expected to take another two years or so, an improvement in service quality could be that long in coming. By then it’s expected that cash flows will improve along with the end of the ongoing consolidation phase that was hastened by the entry of Reliance Jio Infocomm a year ago with free voice for life and low data prices. 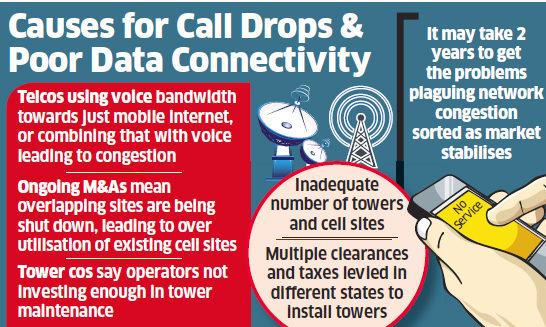 A Department of Telecom survey through automated calls though has found around 8 per cent reduction in call drop complaints over the last 10 months to October 31.

Executives and analysts told ET that poor coverage remains a bane with some warning that the situation may get worse.

“Industry is going through a peculiar phase with multiple technologies, limited funding and need of fiberisation-linked right of way (ROW) and there is need for more towers,” said Prashant Singhal, emerging markets TMT (technology media telecom) leader at consultancy firm EY. “Within the next two years though, there should be improvement.”

Users have been beleaguered by poor call quality for several years. Trai recently prescribed a new set of rules to measure quality of service and the first data are to be submitted in January. Before that, telcos need to submit network-related data in line with these rules. Companies face a penalty of up to Rs 10 lakh per circle per quarter for violations.

Bharti Airtel, Vodafone India and Idea Cellular, the top three telecom providers in that order, didn’t respond to queries on worsening call quality. Neither did Jio and smaller operator Aircel. Vodafone India and Idea are in the midst of merging their operations and will become the No. 1 once that process is complete. Apart from this, Bharti Airtel is acquiring Telenor India as well as Tata Teleservices’ consumer mobile business.

To be sure, Bharti Airtel recently raised capital expenditure for this fiscal year by Rs5,000 crore to Rs25,000 crore to expand its 4G network, while Jio’s network is almost brand new. Vodafone and Idea have more modest capex plans amid their ongoing merger, analysts said.

Rajan Mathews, director general of the Cellular Operations Association of India (COAI) lobby group, blamed the poor connectivity on insufficient towers. Some of this is related to local resistance.

“It is an ongoing challenge and we have had major problems getting approvals in time from various municipalities to put up towers,” said Mathews.

The problem is acute in urban areas where the towers are either too close to each other or too sparse.

Analysts said India’s older operators had bought airwaves such as 900 Mhz, 1800 Mhz and 2100 Mhz-historically used for 2G and 3G–for voice calls. But with the rise in data usage and tariffs with free calls, these airwaves are increasingly being used for 4G. The ones still being used for 3G are increasingly carrying both voice and data, straining the system. Investments in 2G have almost stopped.

“The transition process (to 4G from 2G and 3G) is very painful–it could lead to a lot of call drops,” said the senior executive cited above. “The changes are on the ground level, lot of base stations get changed, and network stabilisation can take up to a year.”

The current system can’t cope with the rising number of users, as some companies look to compete by offering freebies.

“Call drops and reduced data throughput are due to lack of adequate cell sites and network infrastructure deployed by telecom operators,” said a spokesperson at GTL Infrastructure.

“With the onset of 4G, the cell sizes are technically shrinking. In reality however, network strengthening is not happening due to lack of investments by operators. In present times, certain telecom operators withdrawing their networks are shutting sites leading to users facing sudden network outages,” the spokesperson added.